How Much Do People Lose From Gambling?

I've mentioned several times before that I enjoy an occasional trip to Las Vegas.     I also enjoy buying an occasional lottery ticket.  For me gambling is just an entertaining diversion where I can spend $10 or $20 at a time for an interesting diversion and a chance at winning some money.   Compared to the usual Vegas gambler which spends $559 per trip on average I spend very little on gambling.  Most of my money in Vegas goes to hotels, show tickets and buffet trips.    Most of the people I know who go to Vegas spend a lot more on gambling than I do.

How much Do Americans lose in Gambling?

This article Gambling : The Biggest Losers on The Economist shows how the USA compares to other nations as far as amount of gambling losses per adult.     The chart has bar graphs rather than exact figures but you can see that the value for the USA is around $375 loses per year per adult. 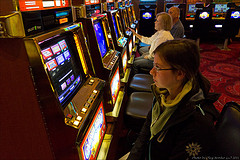 American Gambling Association gives figures for the total amount of commercial casino gross gambling revenue.   This figure is the amount of money the casinos keep after prizes are paid out.  In 2010 the total gross gambling revenue was $34.6 billion.    There are also many Native American casinos across the country.  Wikipedia article on Native American Gambling cites that revenues from Indian casinos is $18.5B.  Before I talked about state lotteries and gave some information on the payout rates.   Going back to the same source I got those numbers from we can also get information on the amount of money wagered and taken in by thee states.   They say that the total net sales by lotteries was $53.7B and prizes were $34.6B so that means that states took in $19.1B after paying out the prize money.

However I should point out that some portion of the gambling loses in the USA are from tourists who are not US residents.  The actual amount lost by US residents is lower than that $556 figure.

Whether the loses are $375 per adult or $556 per household these are pretty large numbers.    The amount lost gambling by Americans is a pretty significant impact on our household finances.   We should keep in mind that these are just averages and that they will be skewed high by individual heavy gamblers.

How common is Gambling?

Gambling to some extent is pretty common in America.   Most Americans gamble in one form or another.   A Gallup poll from 2007 reported that 24% of Americans visited a casino, 46% bought lottery tickets and 17% wagered on sports.     All together the poll reported that 65% of the people surveyed had gambled in some form or another.     That still leaves about 35% of the population who didn't gamble.

For most people gambling is an entertaining diversion but for some people it is a serious addition that can cause financial ruin.   An article hosted on the  Justice dept. site says "One research group suggests that about 10 percent of bankruptcy filings are linked to gambling losses, 20 percent or more of compulsive gamblers are forced to file bankruptcy because of their losses, and upwards of 90 percent of compulsive gamblers use their credit cards to gamble" and that "Harvard Medical School researchers estimate that around 1.3 percent of American adults have a gambling disorder."    The National Council on Problem Gambling says that among people calling a Wisconsion helpline for gambling problems "The average gambling debt of those who called in 2010 was $43,800"