Is Gold a good Infation hedge?

It seems pretty common to hear that gold makes a good hedge against inflation. At first I accepted this concept without any examination. It just seemed to "make sense". But then I thought about what I'd seen gold prices do in the past and I didn't really see much there that showed gold prices correlating to inflation. There is a period in the 1970's when gold went up and inflation was high. But thats just one decade. Other than the 70's I haven't seen any real relationship between gold and inflation.

I decided to look at annual changes in gold prices versus annual inflation rates. I got inflation data from BLS and the gold prices from Kitco. I plot the annual percent changes for gold and inflation in the graph below: 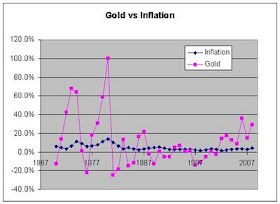 Here is a very detailed and interesting examination of the relationship between gold and inflation: Is Gold an Inflation Hedge?

A professor looked at the relationship between gold and inflation over a 17 year period and concluded: "What the above tells you is that the widely held belief that gold goes up when the dollar goes down is not supported by the statistics: a -0.28 correlation is a weak correlation at best and is certainly within the normal volatility that these two date series exhibit."

I don't see any strong evidence that gold is a dependable inflation hedge for any short term periods.
at 9:37 AM
Share
‹
›
Home
View web version